Once, when I was an intern at the Today Show (many, many moons ago), I was seated by the door of the Green Room when Joan Rivers poked her head in, looked down at me, as I looked up, and said “Hey Lady,” before turning and leaving. It’s a phrase I now use ALL THE TIME. 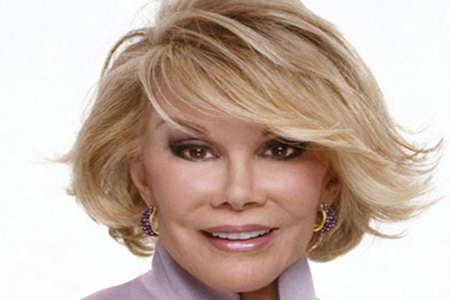 Anyway, I’ve always kind of liked Joan–she was coarse, yes, but a hard-worker. She had ups and downs but she kept going. And she was funny. Below, I’ve copied some highlights from an old New York Magazine profile of Joan Rivers.

–The Joan Rivers diet: You can eat anything you want before 3 p.m. and then nothing for the rest of the day.

–Her single greatest gift is her ability, in the heat of the moment, to find the funny line. My recent favorite example also highlights the rarefied world in which Rivers sometimes travels. Not long ago she was invited to dinner at Lily Safra’s home at 820 Fifth Avenue. Safra owns the most expensive residence in the world, the $500 million Villa Leopolda in the south of France. Rivers was seated next to Carroll Petrie, a rich society lady who is deaf as a post, and the two of them were marveling over, oh, I don’t know, the dozens of Fabergé clocks in Safra’s house. Petrie said, too loud, “Doesn’t it just make you feel poor?” To which Rivers replied, “Carroll, name me one other person in this room who is playing Cleveland this weekend.”

One thought on “HEY LADY.”